So, this new product landed on my desk in a little blue, and very tempting-looking box. Filled with excitement, I opened it and discovered the Cuttlelola DotsPen.

So what exactly is a DotsPen, and what does it do? Well, this ingenious little mechanical pen offers huge possibilities in the development of Pointillism – the art of creating a picture using dots, which can be a painstaking, but rewarding technique. Created in 1886, the technique was showcased by Georges Seurat and Paul Signac – their work is still cited to illustrate the style to this day. 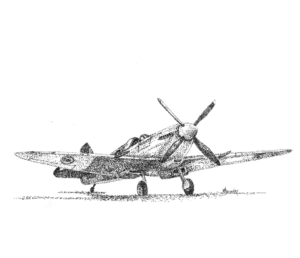 But back to the 21st Century… The pen is powered through a USB charger, so after plugging it in, I read the clear instruction booklet whilst waiting the short time it takes to fully charge (approx 30 mins). The DotsPen comes loaded with black ink which is waterproof and fade resistant when dry,  and there is a little button on the side of the pen which you press once to start it up. The nib then begins to move up and down. It’s quite a strange sensation as it is so contrary to how you would instinctively use a normal pen, but I found I grew rapidly accustomed to it the more I used it.

As with any new tool you need to discover what you can do with it, so I tried making various marks to see what came out. The pen creates marks without you having to actually move your hand up and down at all, it is the action of the nib which does the work. By holding the DotsPen slightly more upright than with a standard pen, I moved it across the page, producing a series of little dots.

With more practice I was able to discover the best techniques for achieving the look I was after. To build up shapes and different tones, I found a circular movement worked well, with larger areas created using a cross hatch technique and then darker tones by concentrating the pen over those areas. The DotsPen has two different speed settings. If you press the button on the side twice while it is running in slow mode, then it moves to the faster setting, which I found to be my preference out of the two speeds. At first I was concerned that the vibrating action would make the pen uncomfortable to use, but this is not the case at all – it is so gentle that you barely notice it.

The black ink is lovely to use and easily refillable with the available cartridges. You can also use coloured inks in this pen – Magenta, Cyan and Yellow. At first you might wonder how to colour mix with these, but again, with a little practice I found that over-laying the colours, you can quite easily create greens, purples and oranges.

I did find that with the coloured inks, they don’t dry as quickly as the black, so I did manage to smudge these as I dragged my hand over the page. However this is easily overcome by a little bit of pre-planning, and not starting in an area which you will need to revisit and consequently smudge. Either that or just be a bit more patient until it has dried!
This is absolutely my new favourite product. I have tried it for portraiture, landscapes, animals, planes – what else can I do!? DotsPen is on charge at the moment while I decide…

To get your hands on one of these fantastic mechanical pens, click here.