Keep the inspiration flowing!   Try out Video on Demand

How to Create Interesting Composition from Photographs with Geoff Kersey

Photographs make an excellent record of a scene that you can take away and work up into a painting back in the comfort of your studio. A good photographic collection can also provide you with a wealth of subjects when it’s not possible to go out painting on location 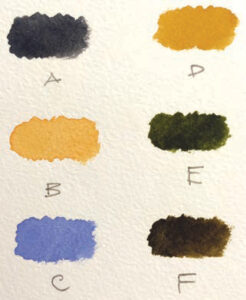 When I came across this farm track, one of the things I liked about it was the fact that I was looking downhill towards the focal point of the little cluster of farm buildings. This meant that I got a good view of the snow covered roofs to contrast with the cloudy sky and dark shapes of the distant trees.

I think it must have been well into the afternoon when I took the photo, because the shadows are long and the light seems to be fading. This has the disadvantage of making the darks, of which there are plenty, very dark which results in a loss of detail. However I decided to make a virtue of that, treating it as a simple winter scene, painted to a fairly small size, aiming to capture the feeling of a cold afternoon, with the countryside very much in winter’s grip.

I don’t believe that snow scenes always have to make the viewer feel cold and I will often deliberately use some warm colour to avoid this, but with this subject I really did want to make it look and feel cold and wintery, so chose the greyer palette shown here: 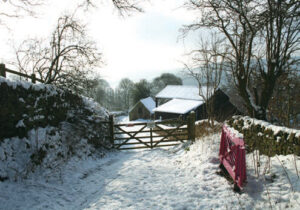 For this painting I have worked from two photos of the same scene. The first has the basic composition I chose for the painting. I have squared the format slightly, mainly to lose a bit of the long, dark wall on the left. I also felt that this wall was too high and almost blocked out the landscape, so I reduced its height and removed the tree, because I felt its height matched up too much with the tree on the right and spoilt the ‘L’ shaped composition. I could have left this tree in, just reducing its height, and compositionally that would have worked, but it would have partly obscured the view. 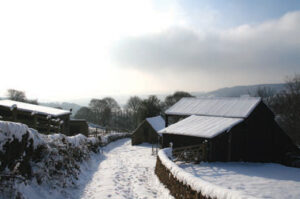 The second photo was taken a few yards down the lane and gives me more detail for the buildings that I want to include. Not only does this solve the problem of the high wall but it gives the scene some extra interest on this left hand side. You might wonder why I didn’t just do the painting from this second photo, but if I had I wouldn’t have had the tree on the right, or the more interesting shape of the right hand wall on the more uneven ground. So with this scene it is very much a case of taking the elements I like from each photo, to create the composition I am happy with.

Accept mistakes happen and learn from them 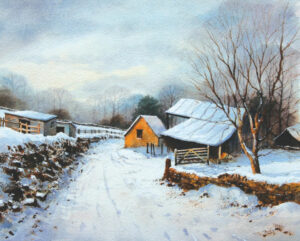 If you compare the first photo with the finished painting you will see a couple of other changes I have made. For obvious reasons I left out the bit of plastic barrier on the right. I also took out the gate that crosses the full width of the path, as I felt it acted as a barrier, almost sealing off the group of farm buildings, rather than inviting us to walk down the lane towards them. However, as you can see I did include the farm gate in the middle distance, in front of the main barn, making a bit more of a feature of it by stopping the wall shorter and opening it up. I intended that this gate should appear half open, but looking at it again I see that it wouldn’t be quite long enough to fill the gap if closed. Unfortunately noticing mistakes like this, long after the event, is one of the hazards of re-visiting past paintings in this way – but nothing lost, as I will have learnt from this mistake.

Notice how on the far right hand side I have added a glimpse of an extra farm building. This was to avoid the main buildings in the middle distance appearing too isolated and conveniently placed, also to make it appear as though there was something happening beyond the chosen scene. 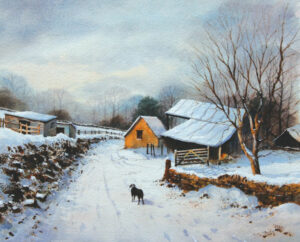 If we look at the finished painting again and compare it with the first photo, you can see that I have put a bit more drama into the sky, by making it darker, particularly towards the top, with just a hint of an orange glow from the weak winter sunshine in the lower part. I wanted to make the sky look leaden with a threat of more snow. While the sky was still wet, I put in the soft wet into wet shapes of the distant trees, gradually darkening these towards the bottom, to provide a good contrast with the snow covered landscape and roof tops.
Because the wall on the left is in quite deep shadow we can’t see a lot of detail in the photograph, so I didn’t put much detail in the painting, preferring instead to suggest the uneven stone-work, leaving patches of white here and there for the random areas of settled snow.

The addition of the dog was the last thing I did, deciding that the scene would benefit from a touch of narrative. One could almost imagine that it is waiting for its master to return. It is interesting to look at the first version and compare how the painting looks without him. I will leave it to you to decide whether the painting benefits from this addition or not. 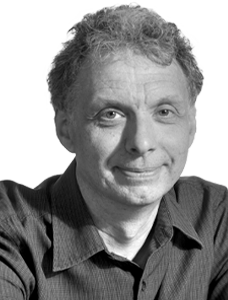 How to Care for Your Brushes

How to Compose Your Painting with Jason Skill

How to create a Line & Wash Drawing with John Harrison

How to Care for Your Brushes

What to Paint When You’re Stuck Indoors with Sue Williams

Using Watercolour and Pastels Together with Ray Balkwill